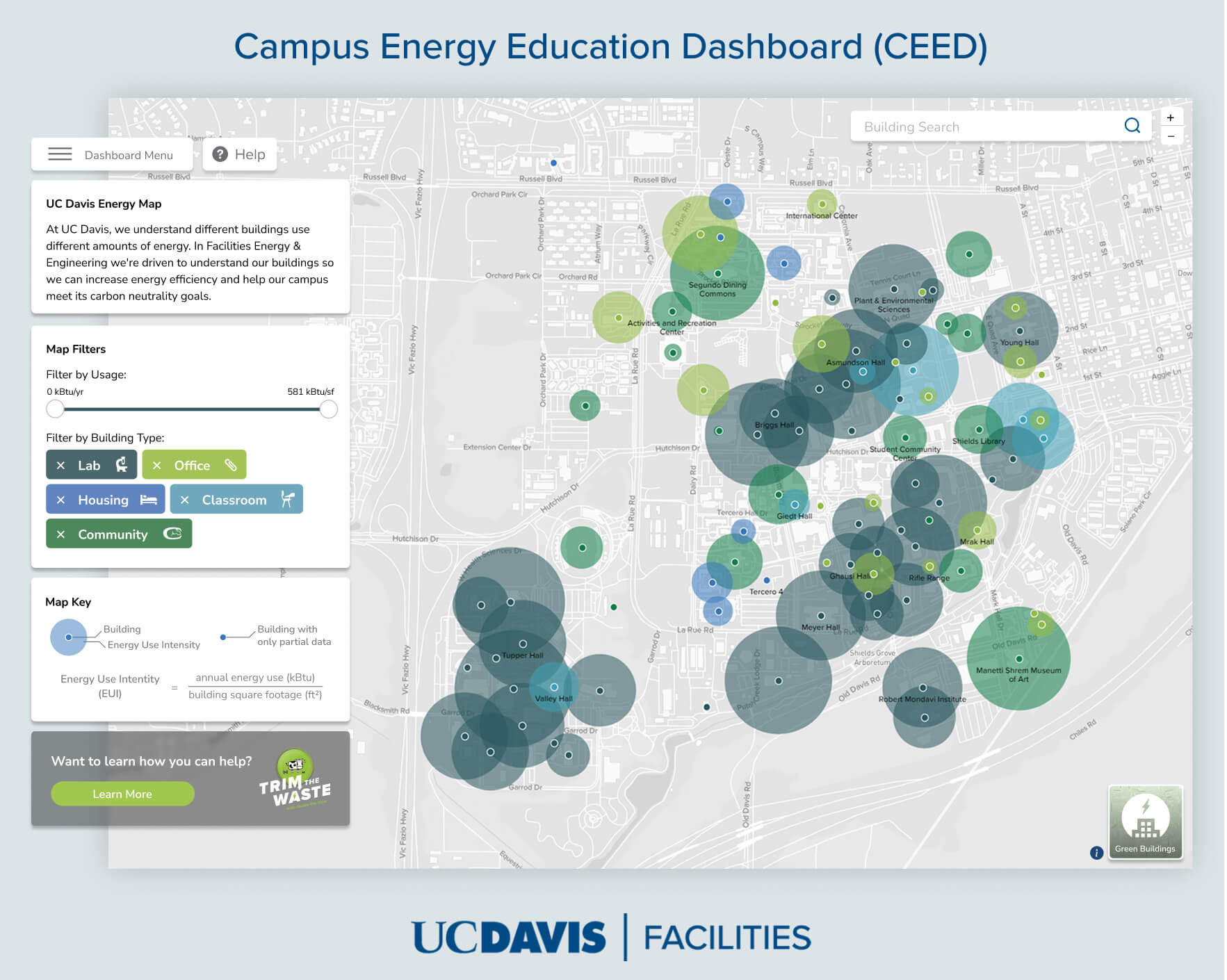 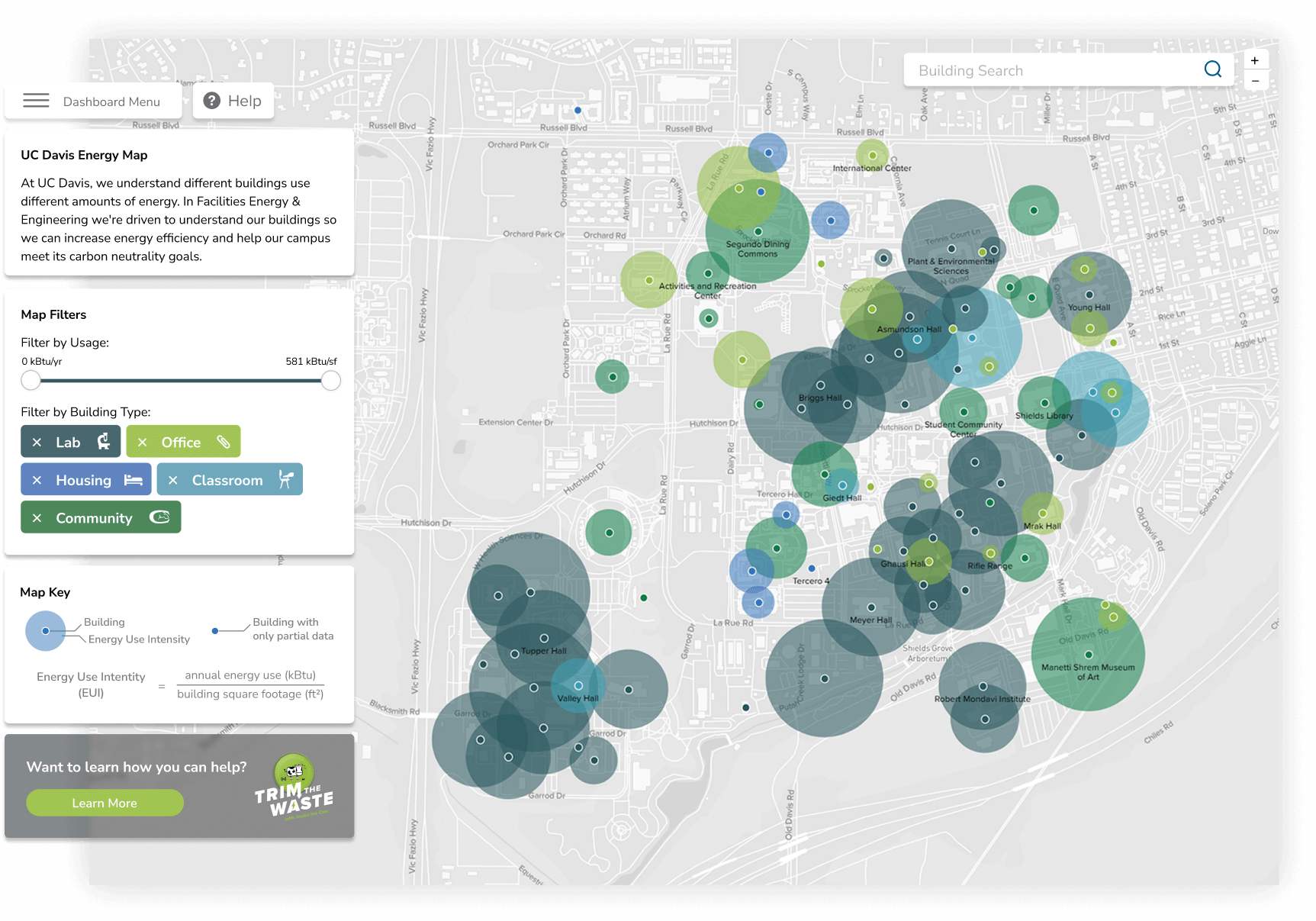 Energy conservation starts with inclusive energy education
UC Davis strives to reach its carbon neutrality goals on campus through energy data transparency and energy-saving initiatives. Energy data, however, is often hard to understand for non-engineers. This projects follows the redesign of the Campus Energy Education Dashboard (CEED), an interactive website that displays energy usage across campus to expand its intended audience from engineers to students and ultimately push for energy reduction across UC Davis.
Project Overview

The Problem
Since it was first designed for engineers, users who don't have a technical background have a hard time using CEED. In addition, CEED on its own does not compel any sort of action or ideas after users visit due to this difficulty.
The Challenge
How might we make CEED more understandable and actionable for users who don't have a technical background to educate the UC Davis student population? 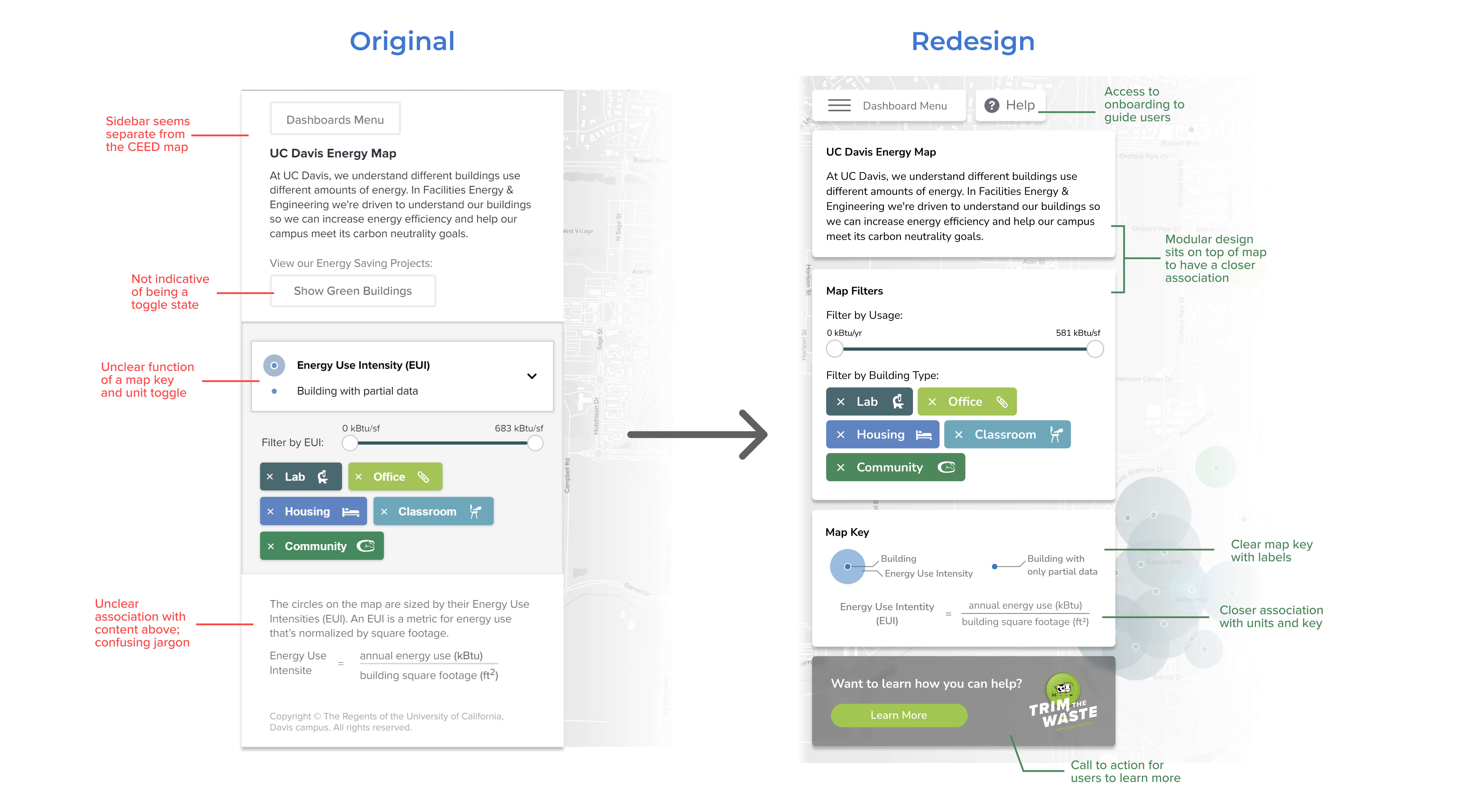 I collaborated with another intern to create our first draft of research goals and questions to make revisions for. We ended up going through three total drafts (as shown below) with our supervisor to hone in on a research goal that would generate thoughtful and meaningful results. Our initial research goals were either too specific on user interaction or too broad to really get anything meaningful out of it. After a few drafts, we settled with the following: 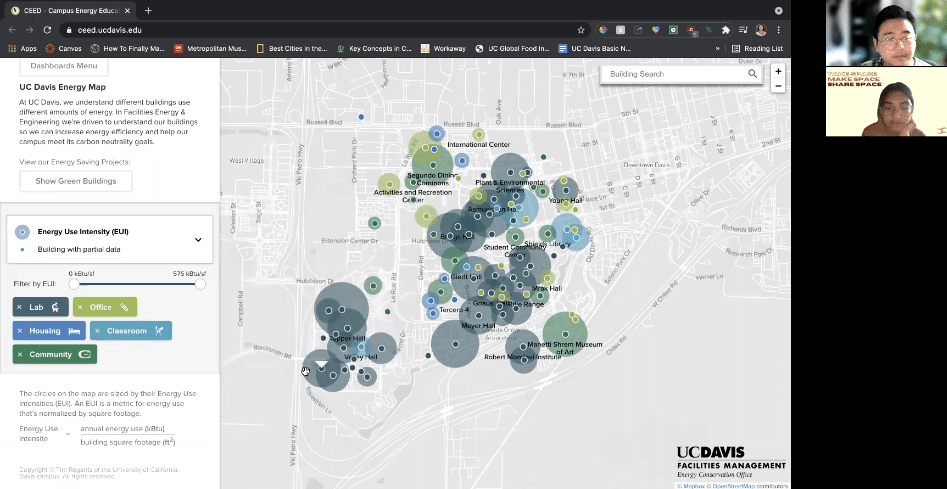 After conducting our first round of testing, we compiled all of our data from each participant including pain points and direct quotations onto an affinity map to be organized into subgroups. After organizing these responses into groups, we started noticing some patterns and correlations that eventually led us to organizing pain points based on a specific user journey. 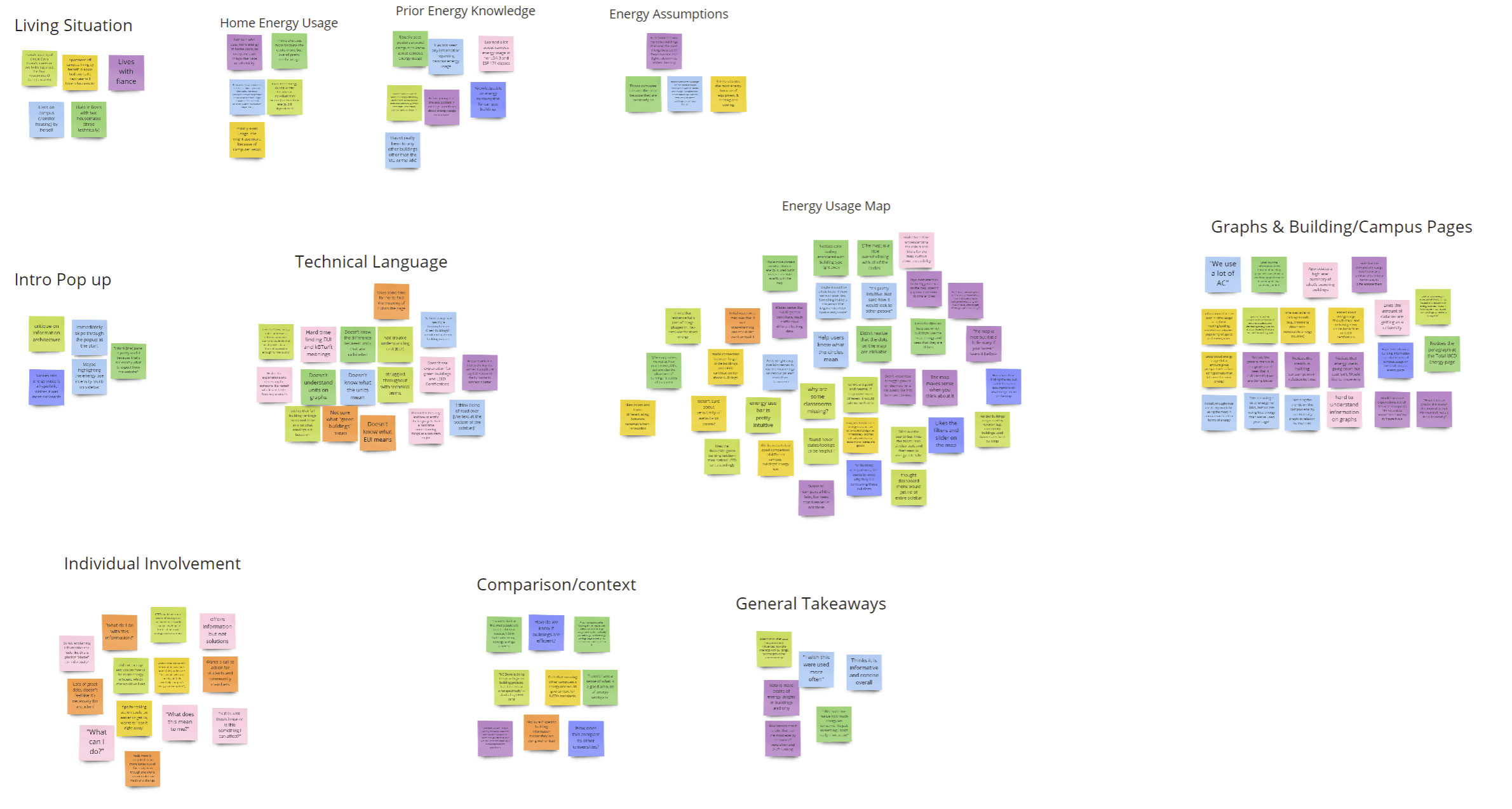 Based on the behavior we observed from users, their user journey with pain points is as follows:

After synthesizing the data from user interviews and testing, I prototyped the sidebar design to address the various pain points found in the user journey, particularly with First Impressions, Reading Data, and Finding Takeaways. 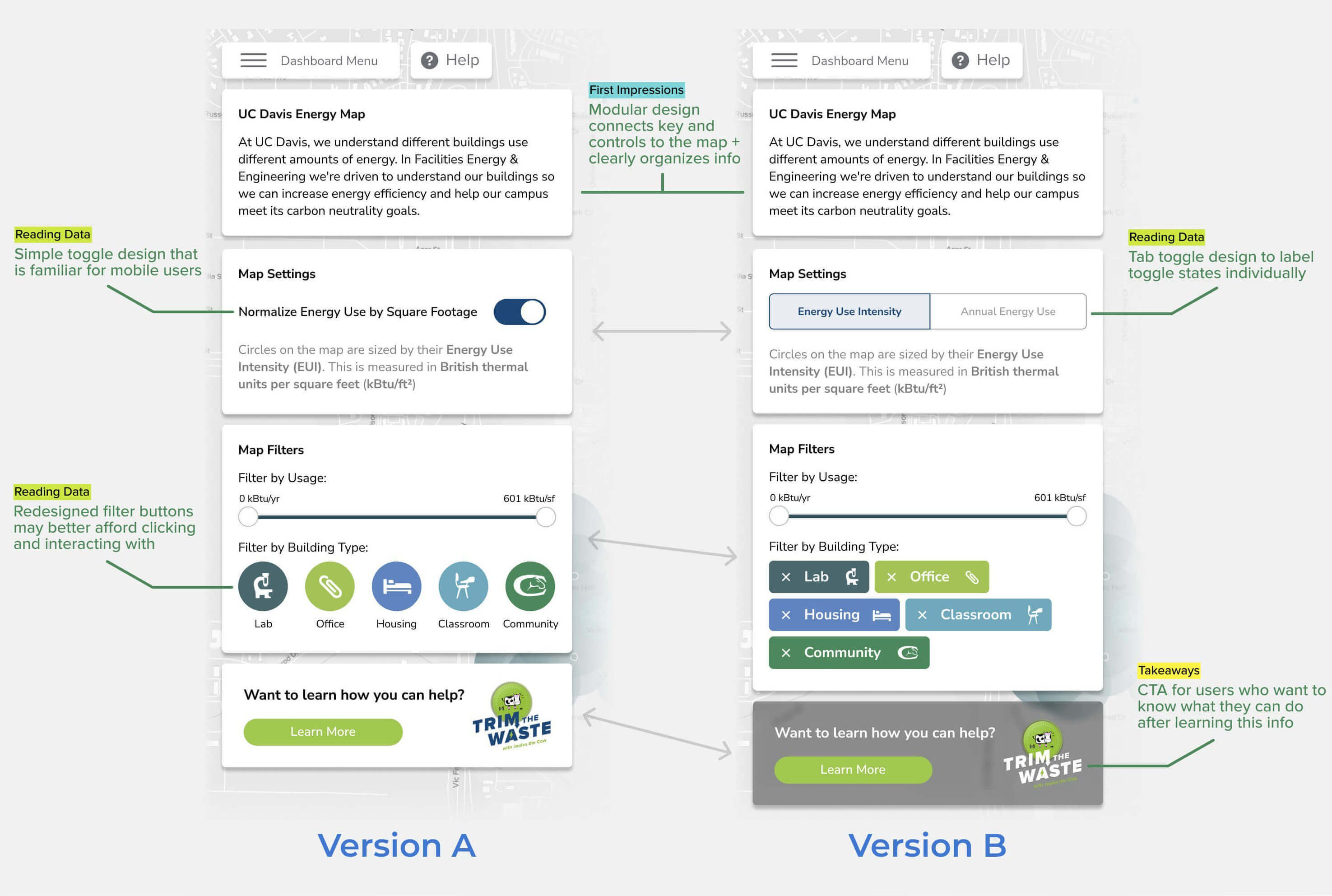 With the toggle on the left figure, forcing one label to encompass both options made it challenging to communicate what clicking it would actually do, which is change the units from the normalized (Energy Use Intensity) to the total unit (Annual Energy Use). Since users often clicked the toggle without paying too much attention, users were especially confused on what changes happened. With the toggle on the right figure, users had a better time understanding what clicking the other option would do.

Although there was preference towards the version B map settings, a majority of users still were confused about what exactly toggling between the options would do in both groups. After collaborating with my project manager and other designers, it seemed best to simply remove the toggle functionality exclusively focus on the "map key" aspect which users seemed to immediately seek when looking at the map for the first time. 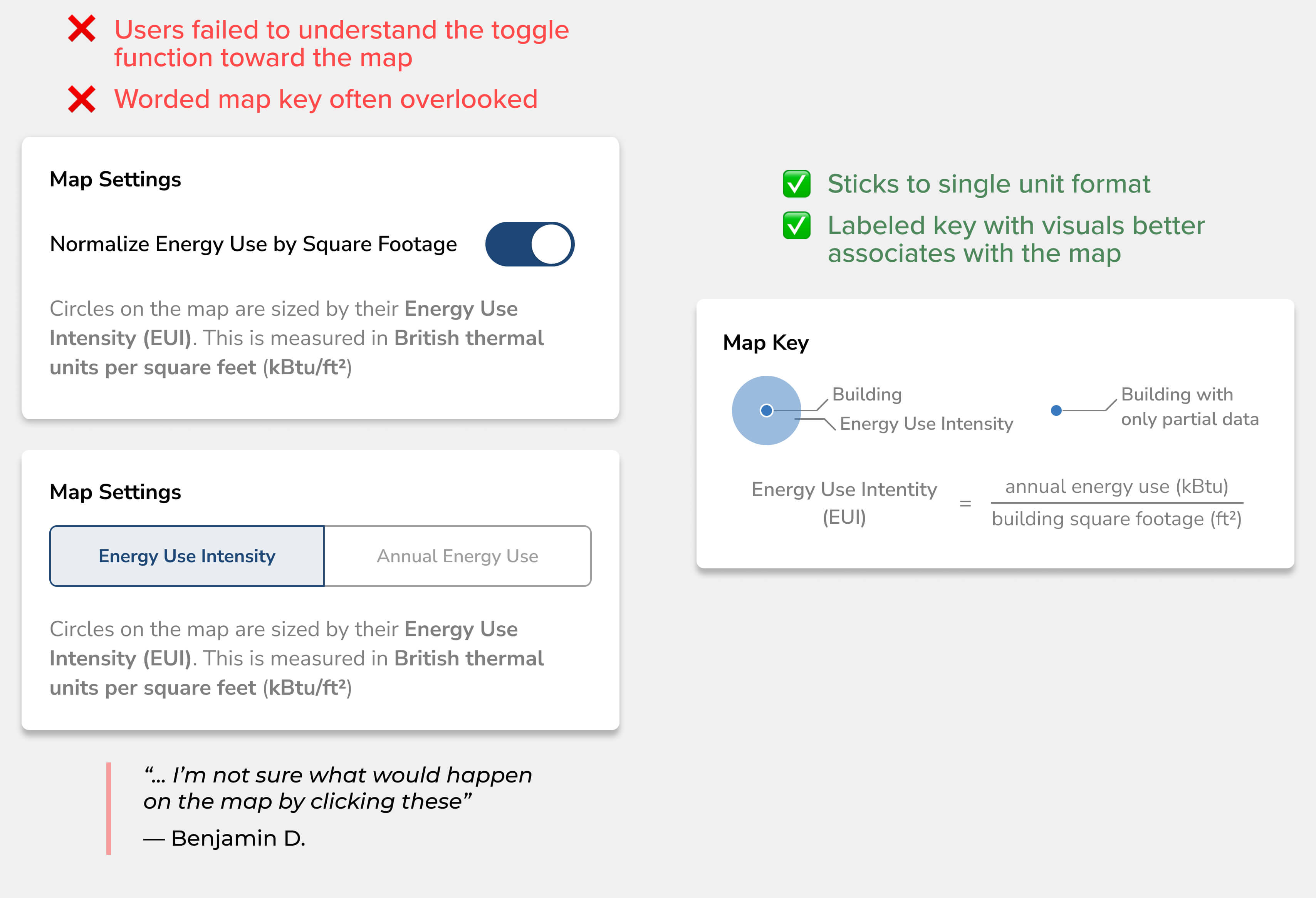 I wanted to experiment between two newer versions of the map filter interactions being in their own “module”. In addition, I experimented with including the map settings in the same section which I ended up changing when we did user testing. 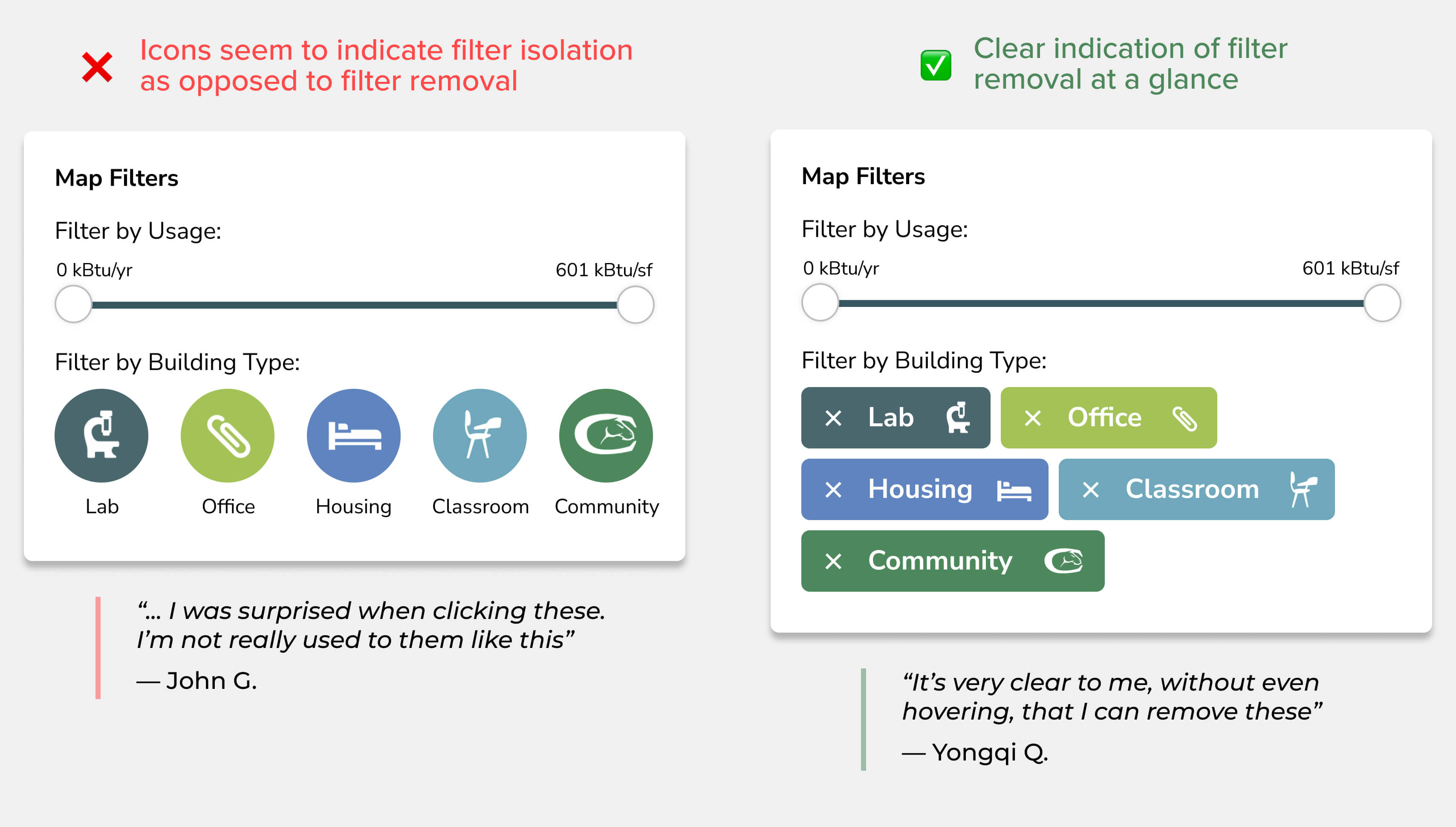 In initial testing, users often felt unsatisfied with experience on CEED because there was no clear action to be taken after looking at all the data in front of them. To satisfy this, I designed a module that links to Trim The Waste, a website that precisely educates students on what they can do to reduce their energy use on campus and at home among other things.

I tested out two versions of the Green Buildings map toggle feature: one that followed the modular design that I had previously drafter, and another that followed design patterns associated with switching between a satellite and normal view on any other interactive map. Users found that the ladder was more efficient, as it made sense given that this feature would trigger a change in the map view, without necessarily changing the map itself.

This project was extended into the Fall and it's expected to soon be handed over to the development team once the product designs are finalized. I plan on continuing to work on this product and implement new designs for a potential onboarding process for users.
‍
Although this project is not yet complete, I have learned so much about the design process and working in a design team throughout the Summer and I have witnessed so much positive change in our product since we first started.

While I have done user research before in previous projects, this project involved a level of depth and focus towards research that I’ve never done before. Due to time constraints and other limiting factors for previous projects, user research often involved things like surveys or a few interviews with users. As a result, I didn’t have too much experience doing more in-depth research and user testing as I’ve done for this project. In creating our research plan for this project, I went through two drafts with my project manager to really understand the goals and intentions for the research we wanted to conduct. It was only by the third draft that I realized the importance of being intentional and selective about the types of research to conduct and interview questions to ask.
‍
Another important takeaway from this experience was being aware of and preventing bias in research. While I had a general understanding of eliminating bias through research courses and previous projects, I still found myself making leading questions in the early stages of drafting the research plan. In addition, I learned that we as researchers can extract very interesting information by asking questions that are related to the topics we want to directly research and can better clarify user mental models. In our first round of user testing, we started asking about their thoughts on energy in the home, later discovering trends in how they think about energy consumption with housemates in comparison to energy consumption with different buildings on campus.

When ideation and prototyping features to address certain pain points, there were many instances where our team was deciding between multiple versions of the same feature. There was never a right or wrong answer from us as designers, so it was really important for us to test with more users to see which versions performed better in certain scenarios.

In this project I worked alongside the developers for the website at every step of the design process to ensure that we were all familiar with what was going on with CEED and that all the features and interactions ideated were feasible from a developer perspective. Many conversations were held during this process in refining the details of interactions and adjusting accordingly based on our timeline and capabilities.